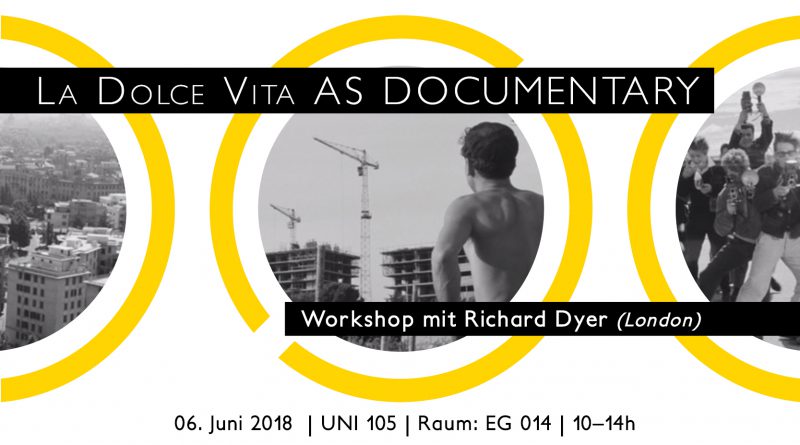 We are excited to announce that Richard Dyer will be visiting our graduate school on Wednesday, June 6, 2018, to teach a workshop on ‘La Dolce Vita’.

Vita
Richard Dyer has an MA from the University of St Andrews and a PhD in Cultural Studies from the University of Birmingham. He was Professor of Film Studies at the University of Warwick and King’s College London and Professorial Fellow at St Andrews. He has lectured very widely in Europe, North America and Australia, been honoured by the Universities of Turku, Dublin and Yale, the Society for Cinema and Media Studies and the British Association of Film, Television and Screen Studies and is a Fellow of the British Academy. His work has focused on issues of entertainment and representation and the relationship between them and he has pioneered work on the musical, stars, lesbian and gay cinema and culture, whiteness and popular European cinema, as well as writing books on pastiche, music and film, serial killing and the films brief Encounter, Seven and La Dolce Vita. His books include Stars, Only Entertainment, The Matter of Images, White, The Culture of Queers, Pastiche, Nino Rota, In the Space of a Song and Lethal Repetition: The Serial Killer in European Cinema.